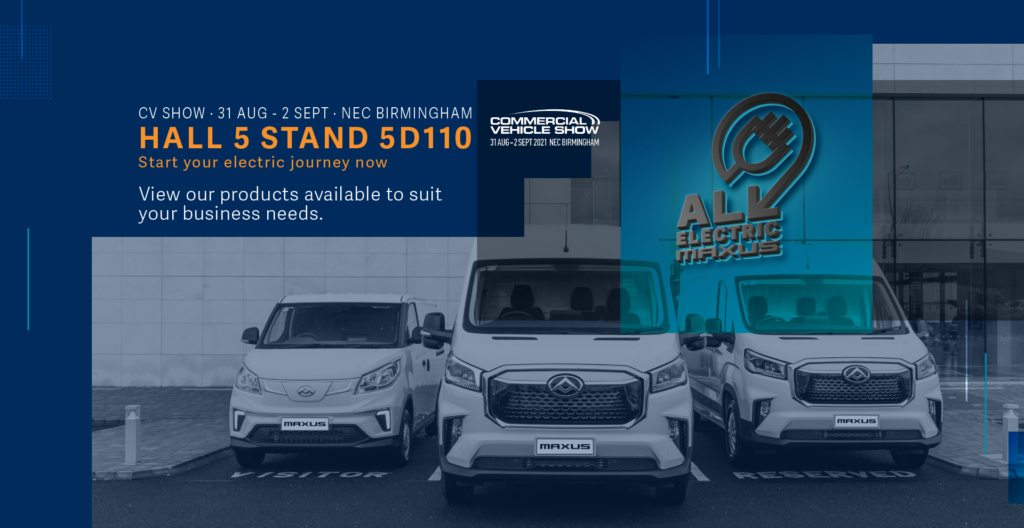 400% increase in sales with EV sales registrations accounting for 54%

For the first time ever, the annual Commercial Vehicle (CV) Show showcased an all-electric LCV stand as MAXUS delivered a pure electric experience for visitors, featuring the new platform e DELIVER 3 and the larger e DELIVER 9 models. A key highlight of this year’s show, visitors could check out nine MAXUS EV variants including an e DELIVER 3 fridge and EV SWB Dropsider (52.5kWh) in advance of the launch of the all-new e DELIVER 3 long wheelbase chassis, which will be available in the UK and Ireland in Q1 2022.

The Maxus pure electric experience featured two of the electric vans available in the Maxus range of EVs;

The e DELIVER 9 – Several e DELIVER 9 variants were available to view.  Launched in June 2020, the e DELIVER 9 illustrates MAXUS’ focus on innovation, customisation, and greener motoring. Everything about this van is of superior quality. Available in two size options, this van offers a remarkable range, clocking up to 219 miles on a single charge and operating with a high power 150KW low energy motor. The all-new platform vehicle offers three battery options – 51.5 Kwh, 72 Kwh and 88.55 Kwh (LH) with various battery cooling methods, which reduce charging time (DC 45mins 5%-80%), as well as extending battery life and increasing the operating range.

The e DELIVER 3 – The e DELIVER 3, designed from the ground-up for electric power only, is a small van with a big range – up to 210 miles on a single charge. With a 92KW motor, there is a battery option latest generation 52.5kWh. Using a DC rapid charger can top up the batteries to 80% in as little as 40 minutes. Available in a number of variants and wheelbase options, the e DELIVER 3 is a fantastically versatile vehicle that suits a wide range of business needs. This year’s CV Show display featured a customised refrigerated unit (52.5 kWh), which is proving hugely popular among customers in the grocery and pharmaceutical sectors.

Speaking at the CV Show, Mark Barrett, General Manager of Harris MAXUS said: “EVs are a common sight on our roads today, which is why MAXUS decided to exclusively showcase a purely electric fleet at this year’s CV Show.   Over 54% of MAXUS sales so far this year are electric and with all eyes firmly on the future of motoring, we wanted to give people the option to explore what electric driving might mean for them during a visit to our stand. At MAXUS dealerships, we provide business owners and fleet managers with a realistic evaluation of where they are on their journey to greener motoring and what they need to do next. We wanted to bring this service to the CV Show too, so that people can equip themselves with the right information for their business – some may be ready to make the switch, others may need to put policies and infrastructure in place before making the move and MAXUS provides a step-by-step guide to ensure that move is as seamless as possible.” 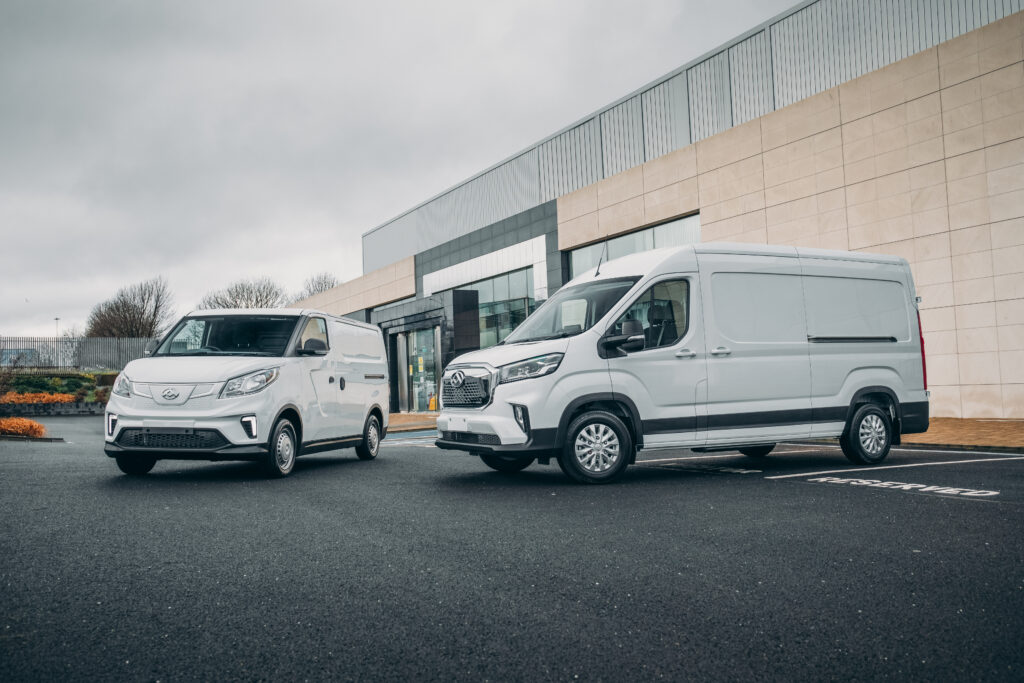 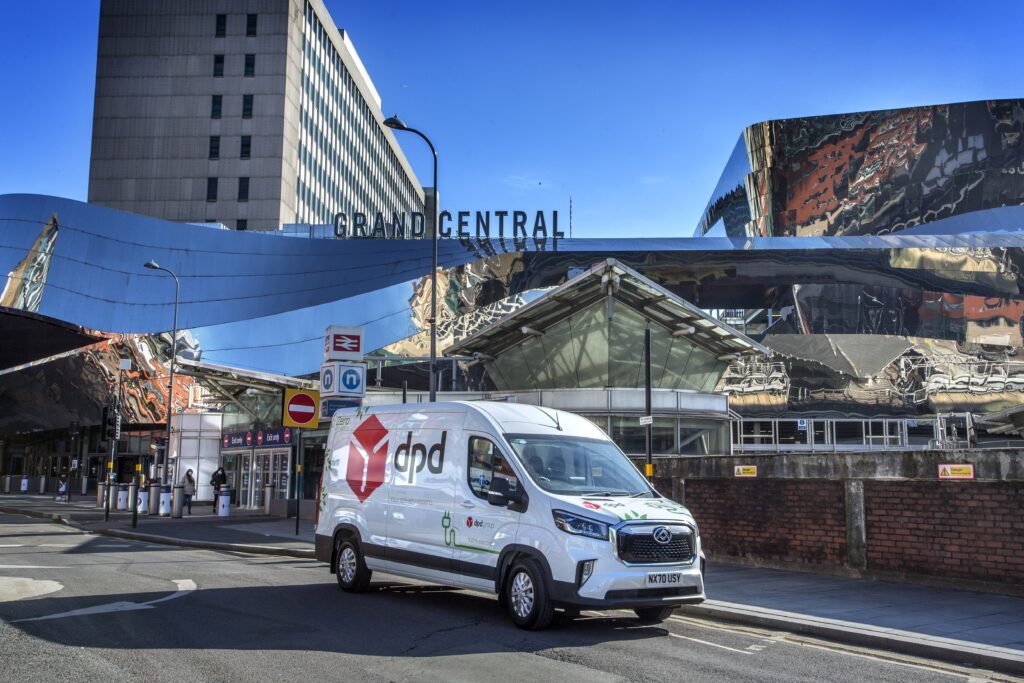 MAXUS has had its best year ever thanks to several significant fleet deals and is currently forecasting a 400% increase in sales in the UK by the end of 2021 (v 2020). EVs currently account for over 54% of all sales registrations, copper fastening MAXUS position as a leader in the commercial electric vehicle sector.

Businesses, primarily in the grocery, retail, pharmaceutical and delivery sectors, have been seeking out MAXUS for a new suite of vehicles in recent months. These deals, and the many other business enquiries that MAXUS has received in recent months is proof that businesses large and small are getting serious about going electric.

One such deal came in the shape of VMS Fleet Management, a leading fleet services group providing refrigeration, fleet management, contract hire, accident management and specialist vehicle hire nationwide. The order of 1,000 commercial vehicles is deemed one of the biggest deals struck by MAXUS in the UK to date. Significantly, 60 per cent of all MAXUS vehicles purchased by VMS are from MAXUS’ EV range with 500 e DELIVER 3s and 150 e DELIVER 9s joining the VMS fleet since September 2020.

DPD also struck a deal with MAXUS this year, which saw the delivery company purchase 750 fully electric commercial vehicles from the stable of the renowned Chinese-manufactured motoring brand. The purchase of 500 e DELIVER 9s and 250 e DELIVER 3s saw DPD double its fleet of electric vehicles in the UK, increasing to almost 1,500 carbon-neutral vehicles.

Milk & More has also expanded its fleet of EVs over the past number of months with the purchase of 100 electric vehicles from MAXUS. This will be the third deal that Milk & More has agreed with MAXUS since 2019, bringing the total number of MAXUS vehicles in its EV fleet to 359. As one of the largest co-op delivery services in the UK, Milk & More has pledged to reduce its carbon footprint and that of its customers both through its delivery fleet and product options.

In other positive news, MAXUS has increased its network of dealerships in the UK this year by 40%, with over 40 dealerships now located around the UK – and growing (50 including service dealers), with a target to reach 80 service points.

Part of the MAXUS promise is to always go the extra mile for customers and each of the new dealerships was selected on the basis that it can provide a full three-sixty degree offering to customers. As a brand, MAXUS is aware of how important after sales is to its customers, that’s why MAXUS’ five-year service commitment is a crucial component of the brand’s offering.   Promising a five-year or 60K miles on the full vehicle EV van warranty (eight years or 100K miles warranty on the battery) and five-year roadside assist as standard, drivers are covered 24/7, 365 days a year, with dealer workshops operating a 24-hour service, helping to minimise vehicle downtime and giving drivers complete peace of mind.

Geographical location is important as the brand continues to build nationwide coverage and the new dealerships were chosen with this in mind.  New dealerships welcomed into the MAXUS family include Brindley Fleet in Staffordshire, Northside MAXUS in Doncaster, Rygor in Newbury, LCV Van Centre in Norwich and Motus MAXUS in Manchester. MAR Vehicle Solutions is the latest dealership group to come under MAXUS signage.  The group has dealerships in Stevenage in England, Bathgate in Scotland and Bridgend in Wales. Meanwhile in Ireland, MAXUS has 23 dealerships located across all four provinces.

Speaking about the new dealerships joining the MAXUS family, Mark Barrett said: “The calibre of dealers joining our network is a clear indication of the appeal of the MAXUS brand and the confidence in the commercial market right now.  Underpinning its appeal is a multi-billion investment from SAIC and MAXUS entered a new era in motoring when it rebranded last June and launched the e DELIVER 3 and e DELIVER 9.

“It’s clear that the LCV market is now recognising just how advanced MAXUS truly is and we are delighted to have welcomed so many well-known names to our network over the past 12 months.”

Earlier this year MAXUS opened its first UK Headquarters in Birchwood Park, Warrington. The 24,239 sq. ft building houses offices for MAXUS’ UK-based employees as well as a distribution centre for Harris CAS, the company’s spare parts division. A training room has also been established at the base, for engineers taking part in MAXUS’ technical training academy.   Along with the opening of the UK HQ, MAXUS grew its management team with two key appointments. In January, Karl Haughton was announced as the new Fleet Sales Manager and Dealer Development Manager.  Mathew Kiziuk also joined the team after being appointed Northern Regional Manager for Fleet Sales and Dealer Development for Harris MAXUS UK.

WHAT’S NEXT FOR MAXUS

Later this year MAXUS will introduce another variant to the e DELIVER 9 family in the form of a short wheelbase LCV. While the variant didn’t make an appearance at CV Show, it will be available to order from Q4 2021.

2022 will see MAXUS build even further on its great range of commercial vehicles with the launch of a seven-seater combi van. Work is also underway to test the market feasibility for a MAXUS Intelligent Flexible Architecture (MIFA) platform seven-seater, fully electric MPV. Mark Barrett confirmed that MIFA would enable EV to be used across the MAXUS range to suit various applications including SUV and MPV.

MAXUS is also exploring the feasibility of introducing a mid-sized pick-up truck, the ET90, to the market.  Other vehicles currently being considered for right hand drive markets include an EV mini bus, a range of medium to heavy duty track including an EV tractor unit, which would move the brand beyond the LCV sector and into heavy duty vehicles.

MAXUS is manufactured by SAIC, the largest automotive company in China. SAIC is part of the Global Lighthouse Network (GLN) of advanced manufacturers, demonstrating how leading companies can work together to realise the full potential of the innovations and advancements at the core of the Fourth Industrial Revolution (4IR). Members of the World Economic Forum’s Global Lighthouse Network are leaders in applying Fourth Industrial Revolution technologies like AI and digitalization, to achieve profitable growth without increasing their environmental footprint.

SAIC recently announced a series of goals for the business that would position the company as a market leader in next-generation car battery systems, autonomous driving and software technology.