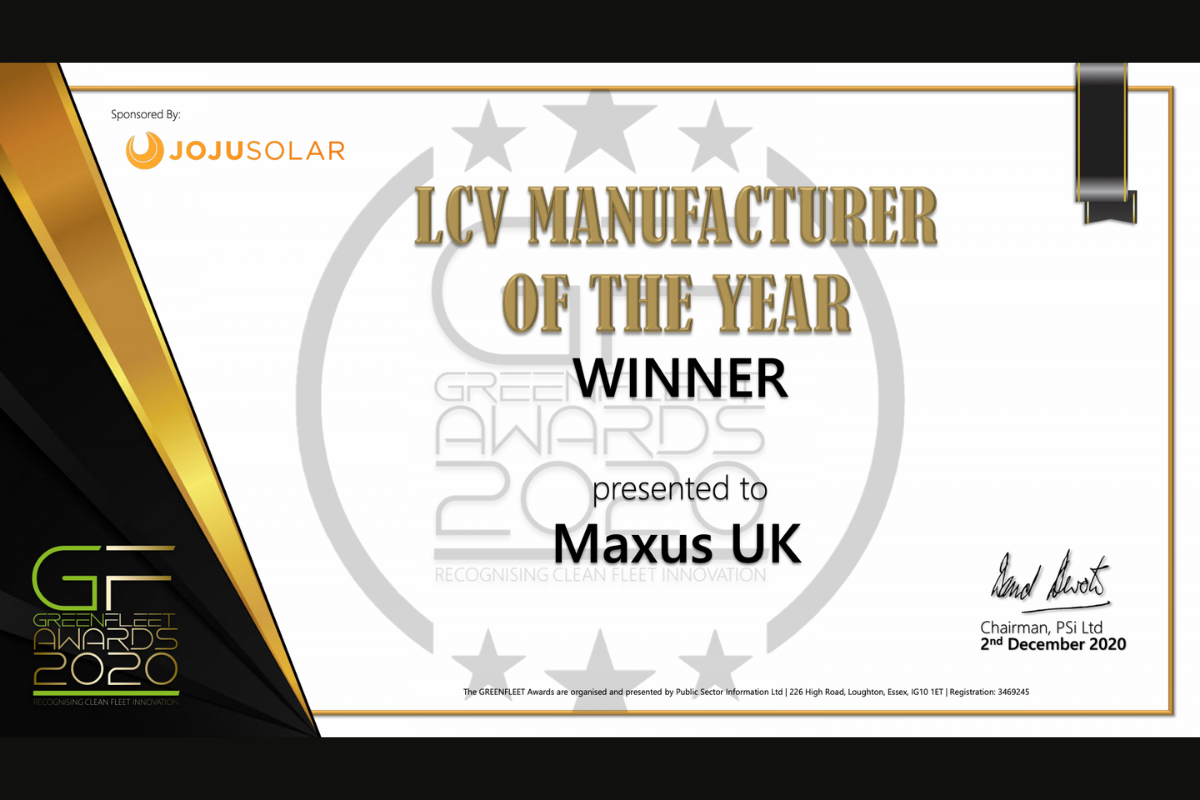 Harris Group are delighted to share that MAXUS have been awarded the LCV Manufacturer of the Year award at the 2020 GreenFleet Awards, held via a live virtual event.

The Green Fleet Awards celebrate the individuals, companies and operators who have successfully and positively contributed to climate change by reducing transport emissions. More notably, the LCV Manufacturer of the Year award commends manufacturers’ efforts to reduce CO2 ammunitions while improving efficiency in the light commercial vehicle sector.

As per the times we find ourselves living in, we were not able to physically attend the ceremony but, instead, participated virtually. Held online, the event was hosted by Roger Atkins, one of the biggest names in the world of electric vehicles, and supported by thoroughly entertaining impressionist Luke Kempner.

If you missed the live awards, you can view MAXUS’ winning announcement.

MAXUS were not only delighted to pick up an award but were also proud to be a key sponsor of the event. Well done to all who were nominated and to those successful in achieving an award. The competition was tough and that is a real testament to our industry,

Harris Group is proud to be the distributor for the MAXUS range of vehicles in the UK, Ireland, Channel Islands, Isle of Man, Malta and Cyprus.

To learn more about MAXUS you can find a dealer near you.

Alex Dunne has been nominated for National Racing Driver of the Year.

Alex Dunne completed another successful season in Formula 4 having won the British F4 champion and vice-champion in the Italian F4 championship. These results prove that Alex is a serious talent and has consistently shown all the signs, both on and off track, of what it takes to make it all the way to Formula 1.

The Myths Vs. Truths of Electric Vehicles

At Harris Group, we are constantly being asked about electric vehicles and their capabilities. During these conversations, the same misconceptions present themselves over and over. That is why we have launched the Harris Group Myths vs. Truths series, to bust the most common myths associated with an electric vehicle and tell you the truth.

Following the success of the Commercial Vehicle Show in Birmingham earlier this year, Harris Group Parts Department and Commercial Auto Spares attended the CV Workshop Expo in Dublin on the 15th and 16th of October.